There are nine students in the Coast Tsimshian Academy’s first ever Grade 12 class. (Cora Barak)

A small First Nations village that once housed a residential school is getting ready to graduate its first Grade 12 class.

There will be nine potential graduates from the Coast Tsimshian Academy, in the isolated northwestern B.C. village of Lax Kw’alaams, this June.

To celebrate the milestone, the Grade 12 class is raising funds to go on an unforgettable grad trip to see what Canada has to offer. 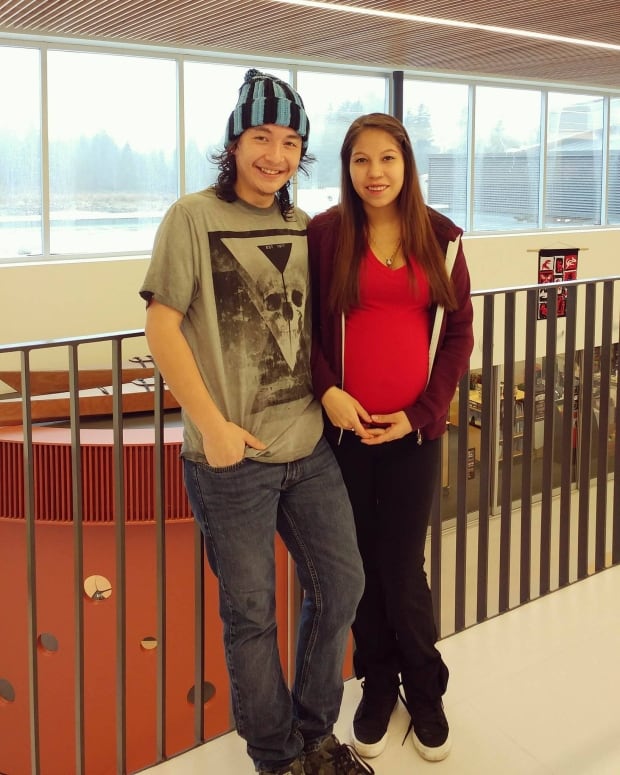 Steve Reece and Nikita Wesley have a three-year-old daughter. They are expecting another child this year and are set to graduate together. (Cora Barak)

But for right now, students like Steve Reece say they’re excited to have the opportunity to graduate at home.

“It means everything to me,” he said.

“I get to get my education so I can move forward in my future and try to help my community,” he said.

Reece is 19 years old and has lived in Lax Kw’alaams his whole life. The village, just north of Prince Rupert, B.C. is home to just over 700 people and is surrounded by beautiful scenery of the Pacific coast.

Reece and his partner Nikita Wesley have a three-year-old daughter and are expecting another child this year. Both parents plan on graduating together as part of the class of 2017.

Reece grew up following his family’s traditional way of life, spending time on the land hunting and fishing. He is applying to universities, but is also considering welding or obtaining Red Seal certification in carpentry after graduation.

Dreams of being a scientist

Cayden White is also a student at the academy. He has grown up with a love of sports and says that his favourite subjects are math and science.

“I love numbers and I love to write,” he said.

White has dreams of being a scientist one day, he says. “I would like to find more minerals out there than here on Earth,” said White.

He plans on pursuing a post-secondary education, but for now the basketball and volleyball enthusiast spends a lot of his time in the gym. 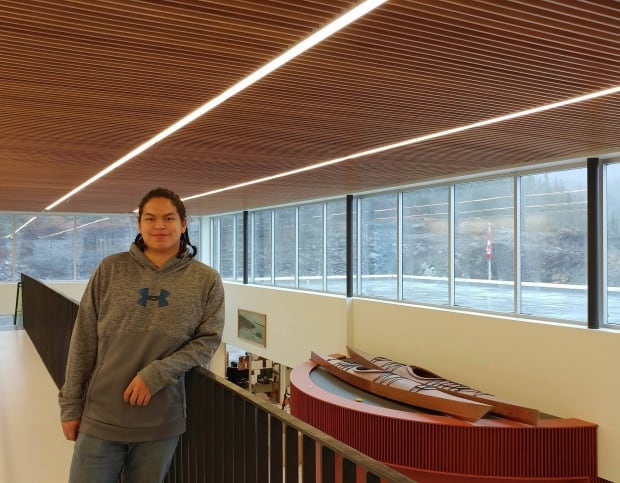 Cayden White poses with a kayak that he made in Grade 10. He dreams of being a scientist one day. (Cora Barak)

The school is not big enough to have a varsity basketball team, so he acts as an assistant coach for the younger junior varsity team.

The Grade 12 class is hoping to see what Canada has to offer outside of their community. They plan to fly to Toronto, with stops in Ottawa and Quebec City.

They’re also hoping to get a visit with Prime Minister Justin Trudeau.

The students started fundraising in December, and have raised $7,000 of their $33,000 goal on their own through bake sales, 50-50 raffles and other efforts.

Barak has been helping to organize the trip. She teaches multiple subjects and is in her second year of teaching high school at the Coast Tsimshian Academy.

She says she’s developed a great relationship with the students by volunteering as a coach, and runs a workout program before classes begin in the morning. The school is the “heart of the community,” she says.

“You can build amazing relationships here with the students. They love being at school and they become attached to you,” she said.

Last year, Barak took a group of Grade 11 students to Alberta for a work-experience program. She is hoping that this year’s graduating class will be able to see more of the country.

“We have a lot of awesome journeys and experiences together. Plus it’s unbelievably beautiful here,” she said.