Romeo Saganash, now the NDP’s critic for intergovernmental Indigenous affairs, contributed two decades of work to an international effort to craft the declaration. He has now brought forward legislation similar to a proposal he made in the previous Parliament.

After discussions with the government, ministers and MPs from other parties, Saganash is optimistic the bill will pass, something he said would amount to a personal triumph.

“After 23 years of work, we got the UN declaration adopted by the General Assembly in September 2007 and what I did this morning is bringing that declaration into domestic law,” he said. “That allows me to complete that circle.”

Prime Minister Justin Trudeau has indicated he will move forward on all recommendations of the Truth and Reconciliation Commission, including a promise to fully adopt and implement the UN declaration as a framework for reconciliation so that must now be tested, Saganash said.

Saganash said he was disappointed that the recent federal budget fell short on addressing the needs of Indigenous people.

“I’ve said all along since this new government was elected that I won’t doubt their sincerity about achieving a new relationship with Indigenous peoples but as a member of the opposition, I have a duty to test that sincerity.”

Saganash’s colleague, NDP Indigenous affairs critic Charlie Angus, has been hammering the government on the lack of mental health funding in its budget as communities, including Attawapiskat First Nation, grapple with a suicide crisis.

“While these communities require long-term solutions, they also require the immediate supports to address the health and mental health crisis that were entirely missing from the Liberal budget,” Angus said.

In New York on Thursday, Trudeau acknowledged Canada has previously failed to honour the spirit and the intent of its original relationships with Indigenous peoples, but he stressed the problem cannot be solved overnight.

“There is an awful lot of work to do,” Trudeau said, noting that First Nations have been marginalized by “colonial behaviours, destructive behaviours, assimilationist behaviours, that have left a legacy of challenges.” 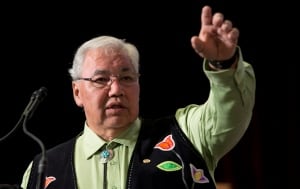 Sen. Murray Sinclair, the former TRC chairman, said Thursday he supports Saganash “wholeheartedly in this endeavour” and plans to do what is necessary to ensure the bill passes if it makes it to the upper chamber.

Many of the laws enacted since Confederation “have been fundamentally racist,” he said in a statement. “In many ways, Canada waged war against Indigenous peoples through law, and many of today’s laws reflect that intent.”

'It took away my identity': A residential school survivor shares his story