In the only photo Marieyvonne Alaka’s family has of her, she pokes her head out of the hood of her mother’s amauti. It was taken in 1959 when she was just a few months old. She was sent to residential school in Chesterfield Inlet when she was four and she died at age eight. (Vince Robinet/CBC)

Jane Sponagle is a reporter with CBC North in Iqaluit. She covers a wide range of stories from the Nunavut legislature to where to find the best pizza in the Arctic.

The photo was taken in 1959, when Marieyvonne was just a few months old.

At age four, she was sent from her home in Igloolik, Nunavut, to the residential school in Chesterfield Inlet. Marieyvonne died in November 1967. She was just eight years old.

“The last time I saw her was when I was going on the plane for TB,” said Marieyvonne’s mother, Therese Ukaliannuk, in Inuktitut.

“Her father was holding her hands. She was very tiny and I can always picture her that way.”

For close to half a century, Marieyvonne’s family did not know where she died or where she was buried. Now, Ukaliannuk, 76, is preparing to visit her little girl’s grave for the first time. 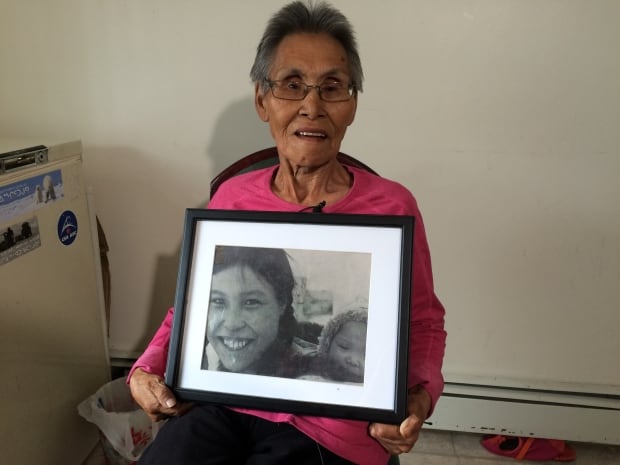 Therese Ukaliannuk, 76, holds the photo of her daughter, Marieyvonne. Ukaliannuk has been searching for her daughter’s grave since Marieyvonne’s death in 1967 and will visit it for the first time this weekend. (Jane Sponagle/CBC)

Thanks to some digging done by a family friend, Martha Maliki, the family now knows more about what happened to Marieyvonne.

Marieyvonne’s health problems started with a head injury. She was being swung around on the playground by some classmates at the residential school in Chesterfield Inlet when she hit her head.

She was sent to Churchill, Man., to get treatment, but she contracted tuberculosis while she was there. It developed into TB meningitis, which left her with a severe disability.

She was sent from Churchill to Winnipeg to be treated for tuberculosis.

“They could not give her the treatment in Winnipeg. So then they sent her to Toronto,” Maliki told CBC Qulliq host Kevin Kablutsiak in Inuktitut.

Then Marieyvonne became a victim of government bureaucracy.

“As the federal government started to change its ways from governing us to the N.W.T. governing Inuit, they started changing locations of where treatments are going to be done,” Maliki said.

Marieyvonne was sent on to Montreal, but the proper treatment was not available. So she was moved one final time to Austin, Que., about 130 kilometres east of Montreal. That is where she died and was buried. 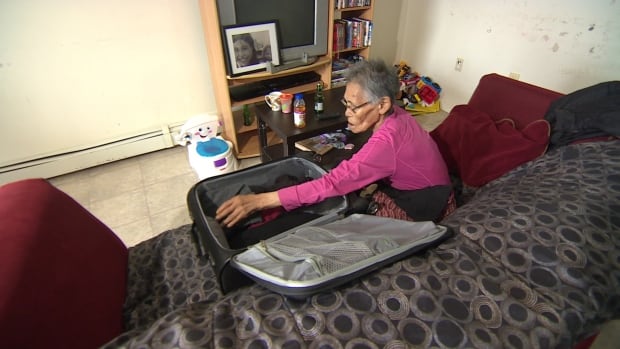 Therese Ukaliannuk packs her bags for her trip. Finding Marieyvonne ‘took a lot of hard work for everyone, so I am very grateful that she is found.’ (Vince Robinet/CBC)

It was difficult to find out what happened to Marieyvonne because she was moved to so many hospitals across the country without her parents’ knowledge, said Maliki.

“At the time, the parents were supposed to sign to let her go out for treatment, but the officials didn’t even ask the parents to sign anything before she was sent to all of these places.”

Some of the challenges in finding Marieyvonne were because Inuit did not use last names at the time and names were changed through the Catholic church.

They were able to find Marieyvonne using her “Eskimo identification number” or “E-number.” The controversial numbering practice was started by the federal government in the 1940s to track Inuit by assigning a number on a tag worn around the neck or wrist.

“It really helped us to find her name, too, because they put her birth date under the E-number. So it saved us so much time because all this paperwork was not helping much and it took a lot of work to find her,” said Maliki.

They had help from the “Nanilavut: Let’s Find Them” program. It tries to bring closure to Inuit families who had relatives taken away for tuberculosis treatment in the 1940s and 1960s, who then died while away for treatment.

“​There’s a lot of Inuit out there who are in the same situation and I hope they find their loved ones,” she said. 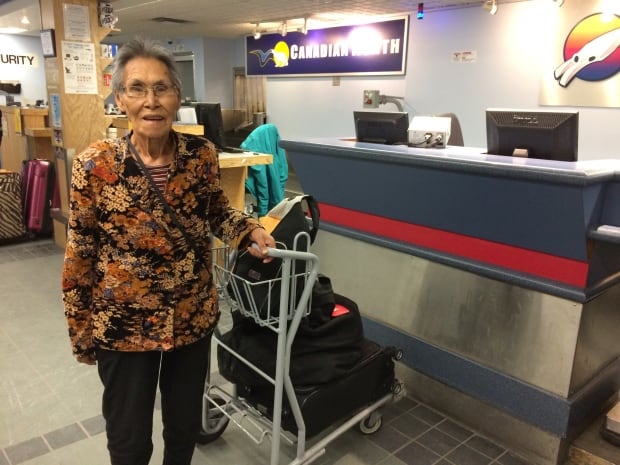 Therese Ukaliannuk checks in at the Iqaluit airport for her flight to Quebec. She says that when she is in the cemetery, she will think about her daughter and her husband Lucien who died in 2007, still searching for his little girl. (Jane Sponagle/CBC)

Inside Iqaluit’s bright yellow airport, Ukaliannuk and Maliki are checking in for their flight to Kuujjuaq, Que., and then on to Montreal. Their tickets were donated by a woman who won a contest with one of the northern airlines.

After decades of uncertainty, they are starting their 2,000 kilometre journey to visit Marieyvonne’s grave. Ukaliannuk said she is relieved and happy.

“Yes. I’m going to move forward now. So I feel the weight has been lifted off of me as we’re about to leave,” she said in Inuktitut.

The pair will visit the care facility in Austin where Marieyvonne spent her final days, the church where her memorial was held and her final resting place.

Ukaliannuk said when she is standing in the cemetery, she will think about her daughter, but she will also be thinking about her husband Lucien, who died in 2007, still searching for his little girl.

“He really wanted to find her before he passed away. He waited a long time for this day, and it seems to be going very fast but he didn’t make it to this day,” said Maliki.

With files from Jordan Konek and Kevin Kablutsiak