Saskatchewan school cemetery is the final resting place of 74 people, mostly students from the school

The Battleford Industrial School cemetery is now surrounded by private property, meaning it’s not legally accessible to the descendants of those buried in the cemetery or other members of the public. (Bridget Yard/ CBC)

Bridget Yard is a video journalist based in Saskatoon. She has also worked for CBC in Fredericton and Bathurst, N.B.

When the Battleford Industrial School closed in 1914, the principal reminded Indian Affairs of a cemetery located a few hundred metres behind the structure, on a small hill in a pasture.

Up to 80 people were buried there — most of them students from the Saskatchewan school — and he worried it would be overrun by stray cattle if left uncared for.

More than 100 years later, the cemetery is surrounded by private property and blocked to the public by a barbed-wire fence, but not for long.

A group of lawyers and educators in the Battlefords is trying to preserve the site as a physical reminder of a dark part of Canada’s history, with the support of the the Rural Municipality of Battle River.

“Sometimes history feels like something that happened a long time ago and doesn’t really mean anything now,” said Sherron Burns, an educator and member of the group spearheading the heritage project.

“It’s just a series of dates and events that occurred. Doesn’t mean anything to me personally.”

She has attempted twice to bring schoolchildren to the site but said she was denied access by the landowner, who lives in Alberta. 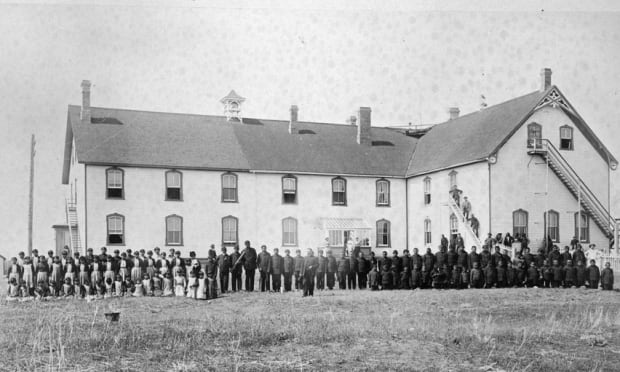 Battleford Industrial School students in 1895. The school was one of the first residential schools in Western Canada, says lawyer Eleanore Sunchild, who is fighting for heritage designation for the school’s cemetery. (Archives of Canada)

“We’re talking about children at this point. We’re not just talking about residential schools. We’re talking about individuals, and individuals whose final resting place is up there on this land. And the fact that we were not allowed to go to that cemetery to pay our respects was a really powerful message to students who question why that would be.”

Burns, along with lawyers Eleanore Sunchild and Benedict Feist, has been lobbying Battle River to designate the cemetery a municipal heritage site.

Battleford Industrial School is believed to be the first residential school in Western Canada, Sunchild said, and operated from 1883 to 1914. Hundreds of Indigenous children from nearby First Nations communities passed through the doors of the school, which focused not on academic education, but labour — like wood cutting.

Not every student was fortunate enough to leave. Most of the 74 people buried on the hill are children. The others are people associated in some way with the school.

The cemetery is about half a kilometre away from the foundation of the former residential school, which later became Government House, the first seat of government for the Northwest Territories before Saskatchewan became a province in 1905. 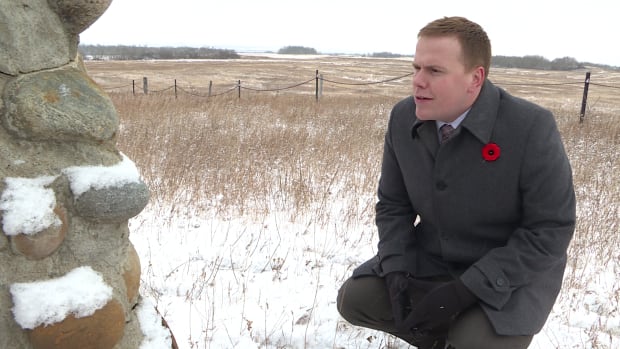 Benedict Feist grew up in the Battleford area, and wants the cemetery preserved beyond the cairn erected there in 1975, which bears the names of 50 people buried there.

“[The cemetery site] was excavated in 1974 by the department of archeology at the U of S,” said the North Battleford lawyer during a visit to the site, brushing snow off the cairn to get a better look.

“We’re standing on private property right now. This is a pasture owned by a landowner who lives in Alberta. So the cemetery is completely unprotected. It’s not treated as a cemetery under provincial legislation.”

According to Feist, Battle River municipal officials were open to the heritage project initially but halted the process after receiving a letter from the land’s owner on Sept. 10.

In the letter — a copy of which Feist provided to CBC News — the landowner stated concerns about “broken beer bottles and garbage,” and said the site “seems to be more of a party site than a cemetery.” 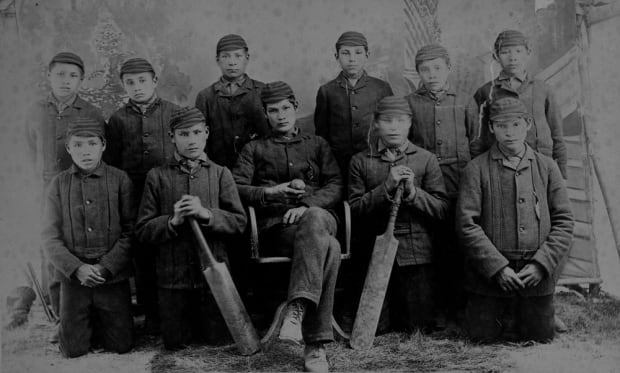 Students of the Battleford Industrial School. ‘There were a number of children who lost their lives at this school. That needs to be remembered,’ says Sunchild. (Archives of Canada)

When Feist visited the cemetery on Nov. 1, no beer bottles or garbage were visible on or around the site.

The group — Feist, Burns, and Sunchild — made their case at a meeting with the RM of Battle River Nov. 2. Council told Feist Friday that the municipality will proceed with the heritage application, without the landowner’s blessing.

There is a 30-day period in which the landowner can file an objection, and if he does, the designation will go to an appeal board.

The municipal designation does not allow for public access so the landowner could still post “no trespassing” signs.

According to Feist, the group wants to ensure the cemetery will be a site for public commemoration, and he will continue up the bureaucratic ladder.

‘A ring of truth and reality’

Eleanore Sunchild has been helping residential school survivors file independent assessment claims for almost a decade, and has heard stories from descendants of the Battleford school, passed down as oral histories.

“It was, from what I can recall, not a pleasant place. It was an industrial school where students were taught to work,” she said. 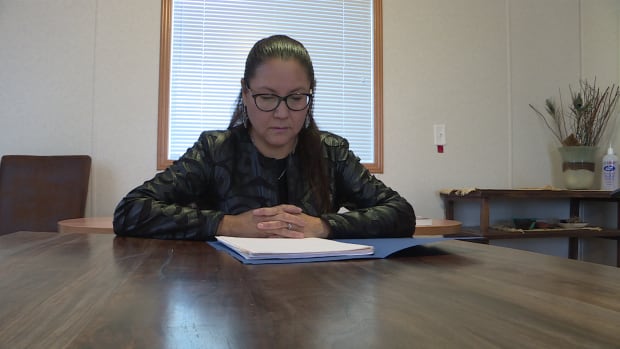 Eleanore Sunchild, above, has been working along with Benedict Feist and Sherron Burns to have the Battleford Industrial School cemetery designated a heritage site. Battle River’s reeve and council have decided to go ahead with the designation. (Bridget Yard/CBC )

The group is “obviously happy” about the decision to proceed with designation.

“It’s graves like this that actually prove there were a number of children who lost their lives at this school. That needs to be remembered.”

For Sunchild, the issue is not property rights, it’s preservation. If the plot of land is designated as a heritage site and a cemetery, it is given certain protections.