The Army Corps of Engineers will not grant the permit for the Dakota Access pipeline to drill under the Missouri river, the army announced on Sunday, handing a major victory to the Standing Rock Sioux Tribeafter a months-long campaign against the pipeline.

Assistant secretary for civil works Jo-Ellen Darcy announced the decision on Sunday, with the army saying it was based on “a need to explore alternate routes” for the crossing.

“Although we have had continuing discussion and exchanges of new information with the Standing Rock Sioux and Dakota Access, it’s clear that there’s more work to do,” Darcy said in a statement. “The best way to complete that work responsibly and expeditiously is to explore alternate routes for the pipeline crossing.”

The army corps will undertake an environmental impact statement and look for alternative routes, the tribe said in its own announcement. 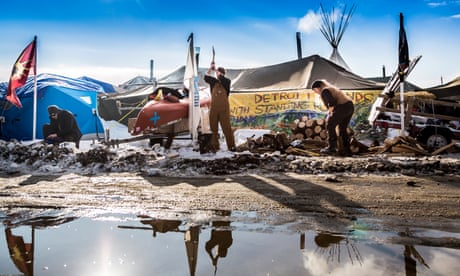 Standing Rock: authorities will retreat from bridge if protesters agree to terms

“The Standing Rock Sioux Tribe and all of Indian Country will be forever grateful to the Obama administration for this historic decision,” tribal chairman Dave Archambault said in a statement.

While the news is a victory, Jan Hasselman, an attorney for the tribe, cautioned that the decision could be appealed.

“They [Energy Transfer Partners] can sue, and Trump can try to overturn,” Hasselman said. “But overturning it would be subject to close scrutiny by a reviewing court, and we will be watching the new administration closely.”

“We hope that Kelcey Warren, Governor [Jack] Dalrymple, and the incoming Trump administration respect this decision and understand the complex process that led us to this point,” Archambault said.

The announcement came just one day before the corps’ stated deadline for thousands of Native American and environmental activists – who call themselves water protectors – to leave the sprawling encampment on the banks of the river. For months, they have protested over their fears that the pipeline would contaminate their water source and destroy sacred sites, and over the weekend hundreds of military veterans arrived at the camps in a show of support for the movement.

Sally Jewell, the secretary of the interior, praised the decision. “The army’s announcement,” she said, “underscores that tribal rights reserved in treaties and federal law, as well as nation-to-nation consultation with tribal leaders, are essential components of the analysis to be undertaken in the environmental impact statement going forward”.

The 1,1720-mile pipeline is slated to carry 470,000 barrels per day from the Bakken oil fields in North Dakota to a refinery in Illinois. The $3.7bn project is almost complete, but the company behind it – Energy Transfer Partners – ran into a major hurdle when they moved the pipeline’s path south from Bismarck, North Dakota, to less than a mile north of the Standing Rock Sioux reservation.

In April, members of the tribe established the first “spiritual camp” on the banks of the Missouri river. Members of hundreds of other indigenous tribes answered their call to join in the struggle, resulting in the largest gathering of Native American tribes in more than a century.

The tribe’s decision to fight back against the powerful oil industry captured the attention of environmental activists and celebrities, as well. Thousands have travelled to the encampments, and over the weekend, a contingent of US veterans began arriving to serve as a “human shield” for the protesters, who have been subjected to rubber bullets, water cannons and tear gas from local law enforcement.

On Sunday, congresswoman Tulsi Gabbard joined the veterans at Standing Rock, where they planned to hold a prayer ceremony at the main encampment. She voiced her support for the Standing Rock Sioux and rejected the “false narrative” that opposing the pipeline is bad for the economy.

“Unless we protect our water, there is no economy,” she said.

“We will name the sins that our armed forces have committed against Native people and then we’re going to apologize and beg for forgiveness on our knees,” said Wesley Clark Jr, the screenwriter and activist who helped organize the “Veterans Stand for Standing Rock” deployment.

Gord Downie emotional as AFN honours him for reconciliation efforts