‘We want to be a part of the healing and reconciliation process’: Regina Archbishop Don Bolen

The centrepiece of the Pope’s proposed visit to Saskatchewan would be a long-awaited residential school apology at Wanuskewin, located just north of Saskatoon. (Alik Keplicz/Associated Press)

Wanuskewin Heritage Park could soon play host to one of the biggest events in Saskatchewan history.

CBC News has learned of extensive efforts to bring Pope Francis to the area in 2018 or 2019.

The centrepiece of the visit would be a long-awaited residential school apology at Wanuskewin, located just north of Saskatoon.

The initial goal was to host the event next year in conjunction with a papal visit to Montreal. Earlier this month, the Vatican said Francis would not be available in 2017.

That hasn’t stopped the efforts of organizers such as Saskatoon Tribal Council Chief Felix Thomas or Regina Archbishop Don Bolen, who served until recently as Bishop of the Saskatoon diocese. They’ve extended the invitation to 2018 or 2019.

“If it was up to us, it would have happened yesterday. We’d like to think it’ll happen sooner rather than later,” Thomas said.

“We need to heal and move on.”

Getting plans in place

Thomas, Bolen and others have worked behind the scenes to secure the support of Premier Brad Wall, as well as civic and federal leaders. Many Canadian bishops are onside, and organizers are in close contact with the Vatican’s Ambassador to Canada, the Apostolic Nuncio Luigi Bonazzi.

Fundraising plans are also taking shape. Another active discussion revolves around accommodating thousands of dignitaries, journalists and residential school survivors expected at such an event.

If the visit is confirmed, Bolen and Thomas said they’ll have to move quickly.

“Obviously, if it happened, it would be the single biggest event that had ever happened in Saskatchewan in terms of size and numbers. So there are so many logistical questions involved in hosting an event of that magnitude,” Bolen said. “So we’ve been working on it, and we’ll continue to work on it.” 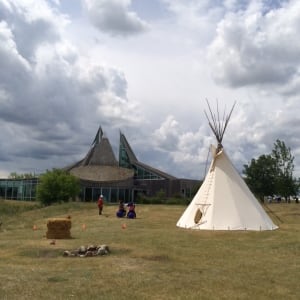 The group working on the effort to bring Pope Francis to Saskatchewan said Wanuskewin was chosen because it’s been a gathering place for thousands of years, and because Saskatchewan was home to more residential school students per capita than any other province. (Matthew Kruchak/CBC)

Wanuskewin was the unanimous choice for a location, they said. It’s been a gathering place for Indigenous people of all nations for thousands of years. Saskatchewan was also home to more residential school students per capita than any other province.

In 2009, Pope Benedict expressed regret for residential school sexual abuse to a Canadian delegation at the Vatican.

That was one step in the process, but Bolen said most former students need to hear an apology that addresses the broader damage caused by the school system.

Bolen said the church admits its role in this dark chapter of Canadian history, and they want to be a partner in the long healing process.

Part of the healing process

The recent Truth and Reconciliation Commission calls on the Pope to apologize on Canadian soil, so that’s what they’ll try to do, Bolen said.

“It was a system that really ran contrary to our own Catholic values,” Bolen said. “This is a system we were complicit in.”

Bolen said a “direct line” can be drawn from residential schools to the rampant suicide, school dropout and unemployment rates afflicting indigenous people.

“We want to be a part of the healing and reconciliation process.”