‘My culture really did save me,’ 20-year-old Shane Monague tells jurors

First Nations youth who testified at an inquest in Thunder Bay, Ont. on Wednesday underscored the long-lasting impact of residential schools and the power of cultural teachings to bring healing.

The inquest is examining the deaths of seven young people from remote First Nations who died between 2000 and 2011 while attending school in Thunder Bay.

The 20-year-old from Beausoleil First Nation said he was raised as a Catholic in a violent home — something he connects to his grandmother’s time at residential school.

“My mom wasn’t creating the violence in our home, she was perpetuating it. She carried it,” Monague said. “It’s not because my mom was a bad person, that’s just what happened to her.”

Wearing a ribbon shirt and holding an eagle feather, Monague said he is grateful for recent opportunities to learn more about traditional First Nations culture.

“My culture really did save me,” he said.

Other youth on the four-person panel — all members of the Provincial Advocate for Children and Youth’s Feathers of Hope initiative — shared similar stories. 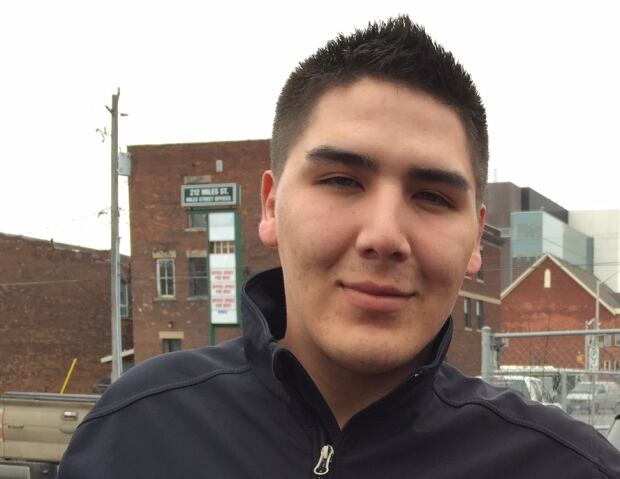 ‘I wish First Nations students were empowered in Thunder Bay and not seen just as obstacles on the street,’ says Harley Legarde-Beacham. (Jody Porter/CBC)

‘I am the legacy of Indian residential school. I never got the teachings I needed.” said Harley Legarde-Beacham. “I tried to hang myself. I used to think I wasn’t good enough for this world.”

The member of Fort William First Nation told jurors that before he learned about his grandfather’s experiences at residential school he thought “it’s just who we are as Aboriginals, we’re crazy and wild.”

“I’d go to [non-Aboriginal] friends’ houses and think ‘wow, you guys are so put together, what’s wrong with us?'” Legarde-Beacham told the inquest, adding that his family was his “rock” through all his struggles.

Marilyn Boyce says she missed her family back home in Eabametoong First Nation so much that she was unable to finish high school in Thunder Bay.

“I had no coping skills,” she said. “If I could have had more support when I first came out, it would have helped me to finish,” she said.

‘I wouldn’t put my children through that’

Now a young mother herself, Boyce said she doesn’t want to raise her children in her home community because there is no high school there.

“I wouldn’t want to put my children through that, having them leave my home,” she said.

The young people were asked what they’d like to see as a priority when the inquest jury makes recommendations for keeping other First Nations students safe in Thunder Bay.

Legarde-Beacham and Boyce both said they’d like to see high schools in every First Nation.

“Equitable funding for First Nations people,” said Brandon Timmerman. The inquest has heard testimony about funding gaps in both education and health care spending on reserve.

Current students from the First Nations high school in Thunder Bay are schedule to testify on Thursday. Evidence is expected to conclude on Friday with recommendations expected some time in June.