Prime Minister Justin Trudeau says he will seek a formal apology from Pope Francis for the Roman Catholic Church’s role in residential schools, a day after the Truth and Reconciliation Commission made public its final report into the legacy of the schools.

The commission, in its 94 calls to action, called upon the Pope to apologize to residential school survivors and their families for the Catholic Church’s role “in the spiritual, cultural, emotional, physical, and sexual abuse of First Nations, Inuit, and Métis children in Catholic-run residential schools.”

Trudeau’s comments came during a news conference in Ottawa after he met with the leaders of five national aboriginal organizations to discuss the commission’s final report.

Asked if he would urge the Pope to apologize, Trudeau said “different churches, including the Catholic Church, are very much engaged with the Truth and Reconciliation Commission, and I am certainly intending to work with the Catholic Church, including with the Holy See, to move forward with implementing that recommendation — to ask him directly to engage with this issue, yes.”

‘The Catholic Church is the only church that has not formally apologized to the survivors.’– Perry Bellegarde, national chief for the AFN

Trudeau — who has committed to implementing all 94 of the commission’s calls to action — said he couldn’t guarantee the Pope would issue an apology, but was prepared to raise it directly with him, given the opportunity.

“I’m not going to pretend that it is my job to order other governments or other organizations to do anything, but I certainly look forward to a constructive engagement where we can address this issue, because quite frankly, there are multiple levels of different organizations that have a role to recognize in this terrible part of Canada’s past.”

“I look forward to having a conversation with His Holiness about this,” Trudeau said on Parliament Hill.

Former prime minister Stephen Harper met with Pope Francis at the Vatican in June and drew his attention to the Truth and Reconciliation Commission’s 94 calls to action, which include the request for an apology.

Harper was criticized by the opposition parties and other critics for not being more direct.

In an interview on CBC News Network’s Power & Politics, interim Conservative Party Leader Rona Ambrose said while a formal apology from the pontiff is out of Trudeau’s control, she didn’t see anything wrong with him seeking one.

“Obviously, the Catholic church had a role to play — a big one —  and that’s clear, but is the Pope of the day willing to apologize? I don’t know, but again I think it’s worth it to try.”

Ambrose was asked about a statement issued the day before by her party’s indigenous critic Cathy McLeod to mark the end of the TRC’s mandate, which began in 2008, two years after Stephen Harper’s Conservatives first came to power.

McLeod said it was “irresponsible” for the Liberals to “unilaterally” accept all of the commission’s call to actions “with no detailed impact analysis or comprehensive costing.”

Ambrose said it was “positive” of the government to welcome the report but expressed concern with Trudeau raising expectations “too high” by accepting all 94 calls to action.

Perry Bellegarde, the national chief for the Assembly of First Nations, said an apology from the pontiff would help redress the legacy of residential schools and advance reconciliation between indigenous people and the Roman Catholic Church.

“We are going to continue our efforts to get an audience with the Pope,” Bellegarde said, “because really, the Catholic Church is the only church that has not formally apologized to the survivors.”

“Getting an audience with His Holiness is very important to bring about healing and reconciliation for their role in the imposition of the residential school system.” 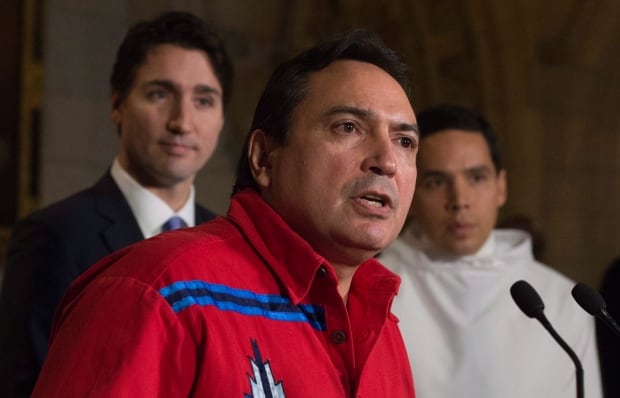 Prime Minister Justin Trudeau and Inuit Tapiriit Kanatami leader Natan Obed listen to AFN National Chief Perry Bellegarde as he responds to a question on whether the head of the Catholic Church should apologize for its role in residential schools. (Adrian Wyld/Canadian Press)

The final report of the Truth and Reconciliation Commission found that while various representatives have offered their apologies for the involvement of their churches in residential schools, “the result has been a patchwork of apologies or statements of regret that few survivors or church members may even know exist.”

“Roman Catholics in Canada and across the globe look to the Pope as their spiritual and moral leader,” the commission said in its final report made public on Tuesday.

“Therefore, it has been disappointing to survivors and others that the Pope has not yet made a clear and emphatic public apology in Canada for the abuses perpetrated in Catholic-run residential schools throughout the country.”

In 2009, the Vatican issued a statement saying that Pope Benedict XVI “expressed his sorrow at the anguish caused by the deplorable conduct of some members of the church.”

The statement came following a private audience with the leaders from the Roman Catholic community in Canada and a delegation of aboriginal leaders, which included former national chief for the AFN Phil Fontaine.

‘Feeling guilty’ is not enough

“We talked about a number of specific issues, but also engaged directly on how we’re going to work together collaboratively to address these problems … and opportunities concretely,” the prime minister said.

Trudeau reiterated his commitment to addressing the “fundamental inequality” between indigenous and non-indigenous Canadians.

“I think it’s natural for people to feel guilty about mistakes of previous generations, but I don’t think we should be wallowing in it or thinking that just feeling guilty is enough. Let’s put that energy and that desire towards fixing things,” Trudeau said.

Trudeau speaks to reporters as he stands with the leaders of five national aboriginal organizations following his first meeting with them on Parliament Hill Wednesday. (Adrian Wyld/Canadian Press)

The commission also found that the harm done to Métis children who attended residential schools “was substantial,” but Métis as a people were excluded from the Indian Residential Schools Settlement Agreement.

Clément Chartier, a survivor of a Métis residential school, said he raised the report’s findings during the meeting with Trudeau Wednesday morning.

“We were given assurances that… our issues will be looked at. I believe that’s very critical to us,” said the president of the Métis National Council.

“We’ve been struggling for many, many years to get to where we are today,” said Chartier. “We see great hope with this prime minister.”

Chartier, whose mother was killed when he was a teenager in residential school, said he welcomed the government taking steps towards the launch of an inquiry into missing and murdered indigenous women.

“I, certainly as one of the family members, embrace this process and we wish to see it move forward.” 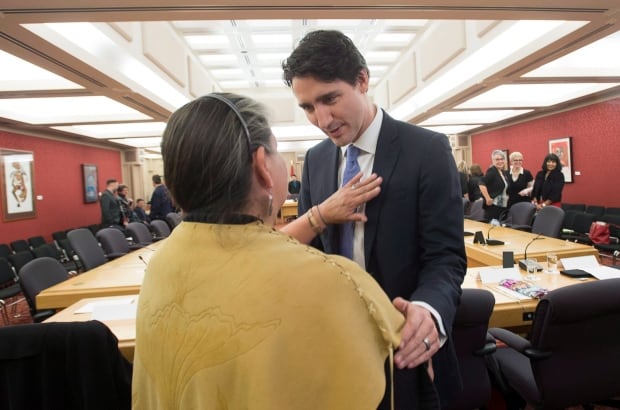 An aboriginal woman places her hand on Trudeau’s heart before the start of a meeting with national aboriginal organizations on Parliament Hill Wednesday. (Adrian Wyld/Canadian Press)

Trudeau has vowed to work with the leaders of the aboriginal organizations, the provinces and territories, parties to the Indian Residential Schools Settlement Agreement and other key partners in responding to the commission’s 94 calls to action.

“I’m announcing that we will work … to design a national engagement strategy for developing and implementing a national reconciliation framework, including a formal response to the Truth and Reconciliation Commission’s calls to action,” the prime minister said on Tuesday.

Tears are fine, but will Trudeau respect Indigenous rights to resources?