Author David A. Robertson says starting the conversation early is not only appropriate, but necessary

Author David A. Robertson says he was inspired to write a children’s book by the Truth and Reconciliation Commission’s recommendation that children start learning about residential schools as early as kindergarten. (Holly Caruk/CBC)

(Note: CBC does not endorse and is not responsible for the content of external links.)

A new children’s book aims to respond to one of the Truth and Reconciliation Commission’s calls to action — to begin education about the legacy of residential schools with children as early as kindergarten.

“I feel like it’s a history that everybody needs to know, and it’s something that we’re not doing enough of, even though teachers are doing a much better job now and are much more willing to do it now than they were before,” said Winnipeg author David A. Robertson.

It’s a sensitive topic that isn’t easy to discuss with young children, but like other sensitive subjects it usually begins when a child asks a question.

When We Were Alone uses a contemporary setting based around a conversation between a young child and her grandmother. The story is a series of questions from the child to “Nokom,” which means “my grandmother” in Cree.

The grandmother addresses the child’s curiosity while explaining a piece of her own past growing up in a residential school.

“Nokom, why do you speak Cree?'” the child asks in Robertson’s book.

“Well, Nosisim, when I was your age, at home in my community, my friends and I always spoke our language. But at the school I went to, far away from home, they wouldn’t let us speak our words,” is the grandmother’s reply in the book. 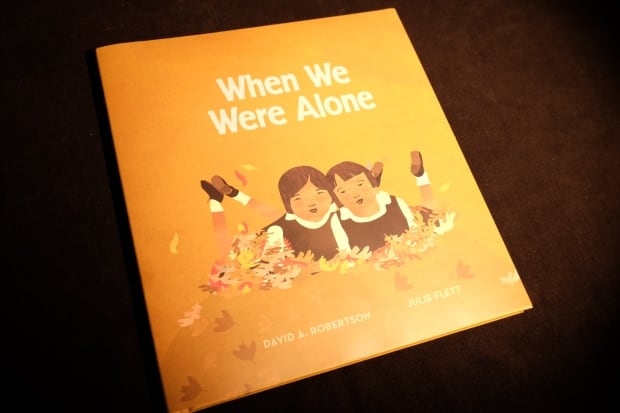 When We Were Alone, written by David A. Robertson and illustrated by Julie Flett, teaches children about the legacy of residential schools through a conversation between a young girl and her grandmother. (Holly Caruk/CBC)

When We Were Alone is aimed at reaching children from kindergarten to Grade 3 and opens a door into a dark part of Canada’s past, Robertson said.

Robertson, who has written one novel and several graphic novels with Indigenous themes, realizes that educating children about residential schools can be a delicate subject but says it’s about laying a foundation to build on as they go through their education.

“We can’t introduce it fully at that age, it’s not appropriate. There’s a lot of difficulties in that history,” he said.

“But if we can teach them something very basic about it, to give them an introduction to it that doesn’t bring up a lot of the difficulties that our kids experienced in those schools, then I think it becomes appropriate. I think it becomes necessary.”

Robertson says it was important to show the pride that exists amongst Indigenous people in their culture, basing the story around a woman who went to residential school but never lost her identity.

The grandmother in the story answers her grandchild’s questions each time beginning with, “Sometimes, when we were alone …,” explaining how she and other children tried to hold on to their culture.

The story shows the great pride the grandmother takes in being able to express her Indigenous identity.

“A grandma who has come out of this experience hanging on to all the things that were tried to be taken away from her was really important for me, to frame it around empowerment,” Robertson said.

Shannon Siemens is a Grade 1 and 2 teacher at Winnipeg’s Brooklands School. She says it’s important to have resources available to help teachers talk to their students about residential schools.

“This is a great story that we can [use to] begin that conversation and they can start to form their questions, so that they can develop an understanding for what residential schools were and the history of our country,” said Siemens. 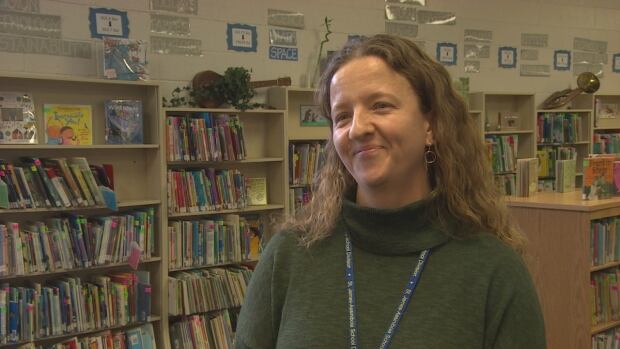 Shannon Siemens teaches at Winnipeg’s Brooklands School. She says it’s important to have books that Indigenous students can relate to and that open the door for conversations about subjects like residential schools. (Holly Caruk/CBC)

She says it’s exciting to see how students connect with the subject matter, and especially with the use of Cree words and pictures that Indigenous children can identify with.

“For them to see themselves in books, for them to hear their languages, to see their culture expressed in positive ways, is really important for our kids,” she said.

Robertson, who speaks only a few words in Cree, says using the language helps kids connect with the story in a way that allows them to feel proud.

“The kids who speak Cree … I think they felt really empowered, they were like, ‘Hey, I speak Cree too,'” he said. 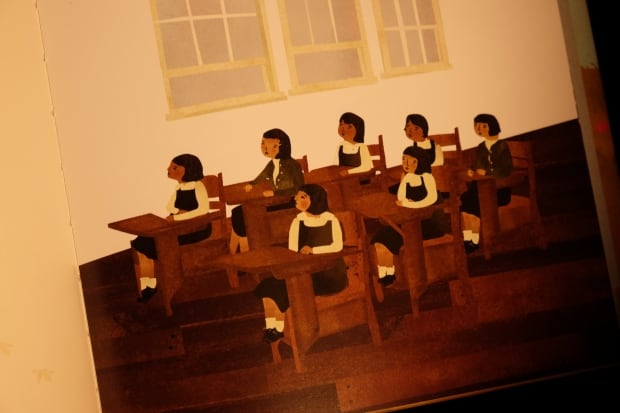 The book aims to use language and illustrations that young children can connect with. (Holly Caruk/CBC)

For Robertson, whose background is Cree, English, Irish and Scottish, being able to identify with his Indigenous culture wasn’t always easy.

“I didn’t identify as an Indigenous person until I was probably in university. I was ashamed of it,” he said.

“I grew up denying a big part of who I was.”

Robertson says writing is as much an education for him as it is for others. He’s used his writing to learn more about his own family history, admitting it’s not something that was discussed with him when he was growing up.

“If you had asked me about the residential school system when I was in university, I wouldn’t have been able to tell you about it,” said Robertson.

When We Were Alone, written by David A. Robertson and illustrated by Julie Flett, was released in December. A book launch will be held at Winnipeg’s McNally Robinson on Saturday, Jan. 14 at 2 p.m.

Anglican Church will issue apology to victims of former minister