No opting out: School district says students will have to study residential schools 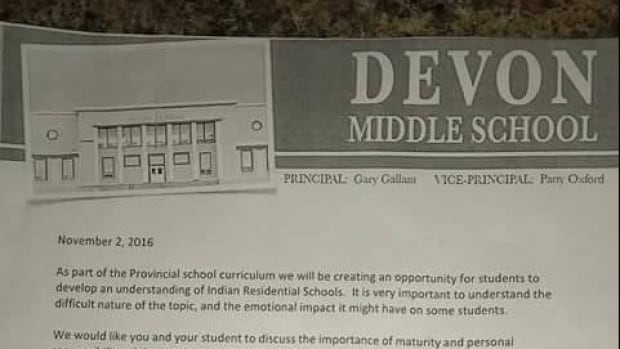 This letter was sent to parents from Devon Middle School, giving them the option of not allowing their Grade 6 children to participate in the social studies classes on residential schools. (Facebook)

The Anglophone West School District has backed away from a plan to allow students the option of not studying the residential schools issue.

The note alerted parents about the “difficult nature of the topic and the emotional impact it might have on some  students.”

It also reported to parents the titles of the novels that would be covered during the lessons developed as part of the provincial curriculum.

They include: Shi-Shi-etko by Nicola I. Campbell, Fatty Legs by Christy Jordan-Fenton and Margaret Pokiak-Fenton, and No Time to Say Goodbye by Sylvia Olsen.

The school suggested parents look the books up on Google prior to the lesson.

Parents were given the option of not allowing their children to participate in the social studies classes on the subject. 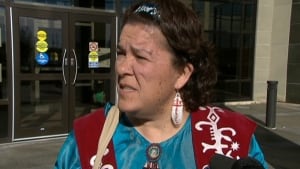 “It is very sad to see such a permission slip,” said Levi-Peters, who served as chief of the Elsipogtog First Nation and is now a First Nations consultant and advocate.

“Why would they ask such a question when all they are teaching is the truth? Would they rather teach something that is not true or hide it? Why would we not want our children to learn the true history?”

When asked for comment on why the slip was sent home with parents, Anglophone West School District superintendent David McTimoney said there may have been a misunderstanding.

“The letter was not meant to suggest that all Grade 6 students had the option to opt out of this curriculum outcome for this grade level,” McTimoney said in an email. 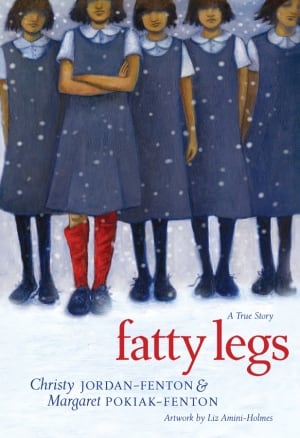 Fatty Legs by Christy Jordan-Fenton and Margaret Pokiak-Fenton is one of the books included in the studies of residential schools for Grade 6 students. (Annick Press)

“The purpose of the letter was to inform parents and guardians that the topic of residential schools is part of the curriculum and that we recognize the emotional impact the topic might have on some students. If this were the case, our teachers would be able to address the learning in other ways.”

McTimoney said he understands how people may have drawn the wrong conclusion and the principal will be communicating with parents to offer clarity. He did not explain what that would mean.

Levi-Peters was pleased to hear the lessons on residential schools will go ahead.

“We can’t change the wrong if we do not acknowledge it, heal it and move forward; part of healing is talking about it, the more we talk about it the easier it will be.

No opting out: School district says students will have to study residential schools