Edmund Metatawabin, a survivor of St. Anne’s Residential School in Fort Albany, Ont., says that what once felt like a victory no longer does. Many of the documents ordered released by a judge have been blacked out. (Sean Kilpatrick/Canadian Press)

Residential school survivors on the James Bay coast are angry that the documents they won access to after a long court battle with the federal government have been heavily redacted.

Survivors say the police and court records that document abuse at St. Anne’s Residential School in Fort Albany, Ont., are useless because much of the information they contain has been blacked out.

Former St. Anne’s students were hoping to use the records as part of their claims for compensation.

Hundreds of First Nations children from remote James Bay communities were sent to St. Anne’s from 1904 to 1976.

Survivors like Edmund Metatawabin said there was severe abuse at the school, including children being forced to eat their own vomit and being shocked by a homemade electric chair.

Gov’t released docs on St Anne’s abuse heavily redacted
In the 1990s the Ontario Provincial Police investigated claims of abuse at St. Anne’s. They laid charges and there were some convictions of former staff at the school.

However, all of the documentation from those investigations and cases was not made available to former students of St. Anne’s in their claims at the Independent Assessment Process (IAP), the body adjudicating abuse claims.

Earlier this year, an Ontario court ruled the federal government did have a duty to hand over all of the files related to abuse at St. Anne’s to the IAP. 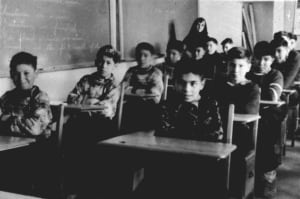 Metatawabin said he doesn’t believe the redactions are in the spirit of that court ruling.

“Why are they so insistent on hiding these documents?”

More than 12,000 records related to St. Anne’s were provided to lawyers for former students last month.

“I felt sick to my stomach, I was so overwhelmed with how much was withheld,” said Fay Brunning, the lawyer who led the fight against the government over the documents.

Brunning said she was shocked to see the names of perpetrators and witnesses blacked out, names that she says are necessary to corroborate victims’ stories.

“I’ve got some clients so damaged that they don’t give good testimony. I really need the witnesses,” said Brunning. “The federal government lawyers are doing everything they can to undermine survivors’ rights.”

Justice minister has been asked to intervene

“How can that be in keeping with the obligations of the federal government to ensure fair hearings?” Angus said.

Angus noted the government was “forced to turn all of the documents over and, at the last minute, they dumped all the documents on the lawyers for the survivors.”

“Just because the federal government is the defendant doesn’t mean it can ignore the law of Canada,” said Angus.

The minister’s office says it has received the letter and is reviewing it.

Angus also wrote to the IAP oversight committee in June, but has had no reply. He has now sent a letter to the IAP’s chief adjudicator Dan Shapiro asking for redress to “reassert a fair process for the survivors.”

Brunning said the only other recourse is going back to court and her clients do not have the funds to do that.

Marking the End of a 'Dark Era'