‘I wanted to tell my story through the pole,’ says B.C. artist Charles Joseph, who attended residential school 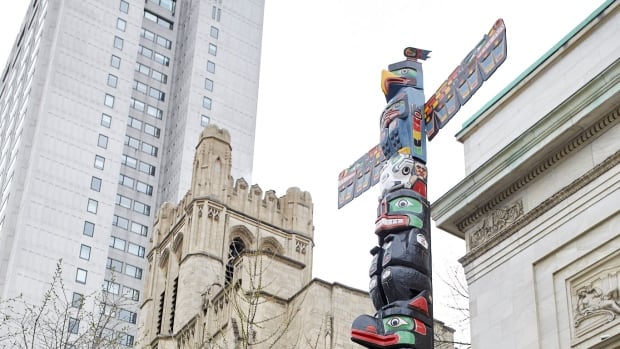 A totem pole carved by B.C. artist Charles Joseph was erected outside the Montreal Museum of Fine Arts. It is part of Montreal’s open-air museum. (Maxime / BRUT)

A new totem pole casts a shadow on a busy Montreal street, serving as a stark reminder of Canada’s dark history of residential schools.

The totem pole was erected on May 3 just outside the Montreal Museum of Fine Arts during an event attended by Montreal Mayor Denis Coderre and several elders from surrounding Mohawk communities.

The display of the pole in Montreal is part of the city’s open-air museum, which includes works of art by Canadian and international artists to commemorate the city’s 375th anniversary and Canada’s 150th anniversary.

Created by B.C. Kwakiutl artist Charles Joseph, the Residential School Totem Pole stands out in Montreal, considering the totem pole is an art form exclusively associated with First Nations along the Pacific northwest.

Having attended St. Michael’s Indian Residential School in Alert Bay, B.C., Joseph drew from his own experience when carving the piece of art.

“Through my totem pole I let go of pain,” said Joseph. “Lots of tears, lots of no sleeping, a lot of thinking, a lot of working on myself and my family, to stay positive through the whole ordeal.”

For Joseph, carving has always been a conduit to tell his story. 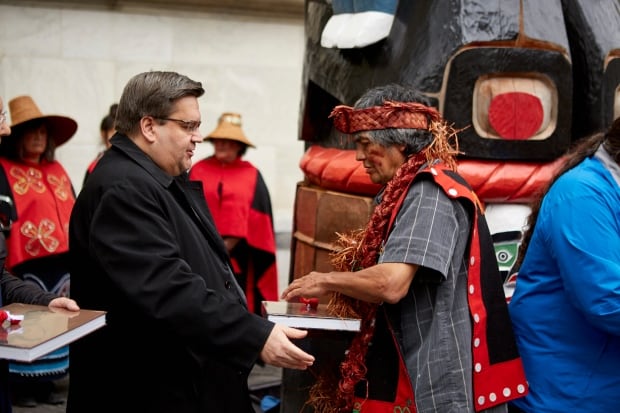 “I wasn’t good at reading and writing … I learned nothing at St. Mike’s. All I learned was the pain they put on me,” said Joseph. “I wanted to tell my story through the pole.”

Joseph wants the totem pole to not only to tell his story, but also the story of First Nations people from across the country.

“All nations have gone through [residential schools],” says Joseph, who used the event to connect with hereditary chiefs from the surrounding Mohawk communities.

“It was a great honour to meet them, and I met some survivors [of residential schools] … I’m just grateful to be part of something like this.”

Joseph has not always used art to cope with the memories of residential school. For many years, he used alcohol and drugs.

But 26 years ago he found sobriety, and turned to his culture to help with his healing. 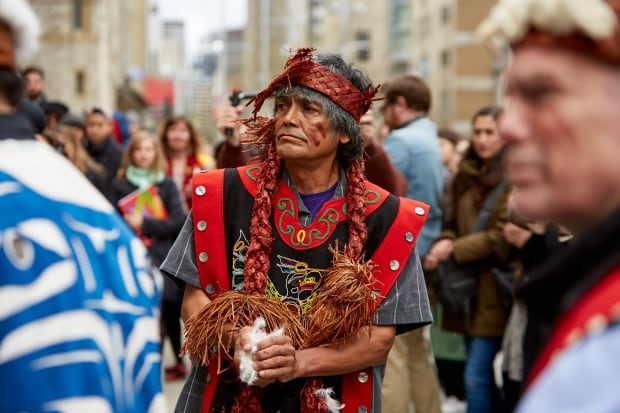 “When I switched from alcohol and drugs to using cultural healing, it was a great move … I re-root[ed] myself in the culture,” said Joseph.

“My great-grandfather once told me, ‘When you get back to culture, son, there’s no end to learning.'” 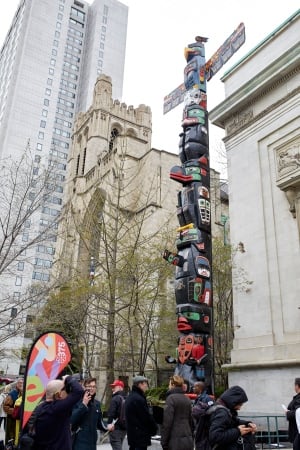 At the bottom of the totem pole — which is where the most important figure is found on any totem pole — is a First Nations mother, arms stretched out, welcoming her children home. (Maxime / BRUT)

At the bottom of the totem pole — which is where the most important figure is found on any totem pole — is a First Nations mother, arms stretched out, welcoming her children home.

Above that is a whale, which Joseph says was chosen to represent children from the Sixties Scoop.

“Our story is when the whale leaves its territory, it’ll come all the way back … to where it was born, where it belongs,” said Joseph.

The totem pole also features a raven, which in First Nations traditions represents the trickster.

At the top of the totem pole is a kolus, which is a mythological bird from Kwakwaka’wakw culture — a nod to Joseph’s home. He describes the bird as having powers similar to the thunderbird.

The totem pole will remain in its current location for the next six months, after which it will be transferred to Toronto for museum display.