Lawyer Louay Alghoul blamed a problem with his firm’s email system for his failure to respond to an adjudicator’s questions sent by email. (CBC)

The Law Society of Manitoba wants to know why Winnipeg lawyer Louay Alghoul failed to respond to emails related to a residential school survivor’s compensation case.

Alghoul appeared before a discipline panel of the society this week and pleaded not guilty to a charge of professional misconduct.

The law society alleged Alghoul failed to respond to four emails sent to him in 2013 by the adjudicator for his client’s compensation claim arising from abuse at a residential school.

Adjudicators’ responsibilities include work such as hearing testimony of claimants, rendering compensation decisions, and reviewing legal fees to make sure they are fair and reasonable.

Alghoul, self-represented at the law society hearing Tuesday, blamed a problem with his firm’s email system for his failure to respond.

He testified that in 2012 the firm changed from a “.ca” email address to one ending in “.com” – a change which he said resulted in his not receiving some of his email to the old account in a timely manner.

Alghoul told the panel many emails, including the four from the adjudicator, ended up in a junk mail folder without his seeing them.

He said it was uncharacteristic of him not to reply promptly to emails and he noted he did later apologize to the adjudicator, Carolyn Frost.

Alghoul testified that if Frost had contacted him by phone, fax, letter, courier or in person, he would have responded immediately.

Frost testified at the hearing that one of the emails she sent to Alghoul pertained to his time record — a document used in calculating a lawyer’s fees.  She said in another of the emails she asked about involvement of a “form filler” — a separate company that helps in filling out applications for clients.

The involvement of form fillers became controversial in the residential school claims process. In 2014, a court ruled fees charged by form fillers above the lawyer’s fees were “unconscionable” and “unenforceable” and adjudicators were called upon to ask lawyers whether form fillers were involved.

Alghoul told CBC News in an interview that he never worked with a form filler.

At the hearing, the law society alleged the adjudicator never got an answer from Alghoul concerning the involvement of a form filler. 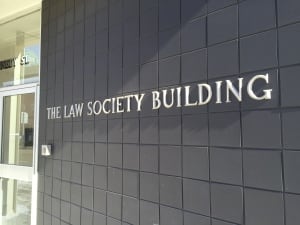 The hearing involving Louay Alghoul is not over but a date for continuation has not been determined yet.

Asked whether she ever thought of phoning Alghoul due to a lack of timely response to the emails, Frost told the panel she did not.

She said she was busy with other files and was not “overly concerned” about Alghoul’s delay because it wasn’t affecting his client.

Under cross examination by law society counsel Rocky Kravetsky, Alghoul acknowledged that on some occasions he continued to respond to messages sent to his old email address after the adjudicator sent messages to that address.

Kravetsky said the first time he heard of Alghoul’s defence that the adjudicator’s emails were not received was on the day prior to the law society hearing.  The law society’s allegation against Alghoul was signed in August 2015.

A financial record of the residential school claimant’s account was also entered as evidence.  Kravetsky said it showed that by July 2013, Alghoul had already received payment for his legal fees of about $15,000.

At that point, the adjudicator had not yet done a review of the fees because Alghoul had not replied to her request for documentation in the four emails sent between August and October 2013.

The law society alleged the adjudicator, Frost, did not receive Alghoul’s time records until March 2014.

Frost testified that money from the Canadian government to cover the lawyer’s fees was meant to remain in trust until after a fee review was done.

Under questioning by Alghoul, Frost said she raised no concerns about the amount of fees Alghoul charged the client.

Alghoul told the panel he dealt with more than 650 residential school claims.

He characterized the problem with the case in question as an isolated incident with a reasonable explanation.

The hearing is not yet concluded but a date for continuation has not been determined.