This special edition of The Current is a public forum held at the Museum of History in Gatineau, Que., across the river from Parliament Hill. The forum explored the work of the national inquiry into MMIWG and connected that to the larger project of reconciliation.

​WATCH The Current’s five-minute virtual reality documentary about the Highway of Tears.

To those who ask why Indigenous people don’t just “get over” the residential school experience, Senator Murray Sinclair has this response.

“My answer has always been: Why can’t you always remember this? Because this is about memorializing those people who have been the victims of a great wrong. Why don’t you tell the United States to ‘get over’ 9/11? Why don’t you tell this country to ‘get over’ all the veterans who died in the Second World War, instead of honouring them once a year?” Sinclair told The Current‘s Anna Maria Tremonti. 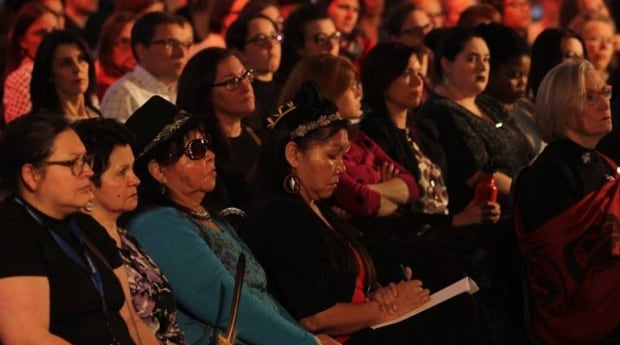 The Current’s fifth MMIW public forum was held at the Museum of History in Gatineau, Que., near Ottawa, on March 28 in front of a live audience. (Barry Gray)

Sinclair was speaking at The Current‘s fifth public forum on missing and murdered Indigenous women held at the Canadian Museum of History in Gatineau.

Sinclair waded into the firestorm of controversy following remarks by Conservative Senator Lynn Beyak, who sits on the Senate’s Aboriginal people’s committee.

Beyak spoke in defence of the “well-intentioned” people who ran the residential school system and said the commission’s report was negatively skewed and “didn’t focus on the good.” She has repeatedly said she stands by her comments.

Matilda Wilson called Beyak’s remarks “a slap in the face.”

“Why we can’t get over it? Because there was no healing, there was no treatments, no help for the residential [school] survivors.”

Wilson was in the public forum audience and shared her own experience being taken to a residential school in 1956.

“When I was six-years-old and my brother was five, and we still crawled in our mom and dad’s bed. That really did something to us when they took us away to boarding school and we were never to see them for seven years,” she says, breaking into tears.

“I want to let you know it still hurts a lot and I want this person, Lynn Beyak, please stand in my shoes.”

Wilson’s daughter, Ramona, disappeared at age 16 and her body was later found in a bush area near the airport in Smithers, B.C.

Wilson says her daughter’s death, alcoholism among Indigenous people and the over-representation of Indigenous children in provincial care systems are linked to the intergenerational trauma of the residential school system.

Inquiry’s lack of progress and poor communication are ‘extremely valid’

Waneek Horn-Miller, director of community relations with the national inquiry into MMIWG, shared her own concerns about her six-year-old daughter. 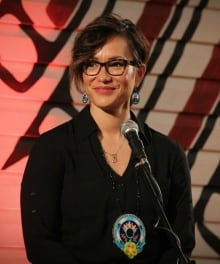 Waneek Horn-Miller, director of community relations with the inquiry, says her team is working very hard to meet the deadlines. (Barry Gray)

“I never want her to grow up to understand that as an Indigenous woman she can expect less than being 100 per cent safe in this country,” Horn-Miller told Tremonti.

She said the concerns that have been raised about the inquiry’s lack of progress and poor communication are “extremely valid.”

“This is something that’s really, really important to us and we’re hearing it loud and clear from many family members and survivors and the national Indigenous organizations. I mean, they’re all telling us the same thing and this is something that we really have to step up our game in.”

Listen to the full segment at the top of this web post.

This event is part of a series of public forums hosted by The Current across the country to explore the issue of missing and murdered Indigenous women.