Here, students learn to play the recorder at Shubenacadie Residential School. Charlotte Morris (back row, second from left) said it wasn’t this ‘picture perfect’ all of the time. (submitted)

A P.E.I. woman who was forced into the residential school system hopes a new course that focuses on this piece of Canada’s history will help build understanding in Island students.

All kids in Grade 9 now take the course Practicing Reconciliation Through Education in social studies.

“It would be good for understanding and also a big eye-opening,” said Charlotte Morris, who spent three years at Shubenacadie Residential School in Nova Scotia in the 1960s starting when she was seven years old.

“I think it’s important for the children to know what’s going on, and I know Grade Niners … they’re not too young to spring this on them.”

Many unaware of this dark history

Morris, who is now 60, says much of the violence and abuse that went on in residential schools has been hidden, and it’s important to raise that awareness in young people.

“I’m sure a lot of them will be in shock because they’re not going to realize, hey this took place,” said Morris, who now lives in Birch Hill.

‘I was lost. My identity was gone. You know, I just didn’t feel like a person.’— Charlotte Morris

Morris still has vivid memories of the day she and her older sister, Margaret, and younger brother, Harry, were put in a car and driven away from their home on Lennox Island, P.E.I.

“Didn’t have a clue what was going on. No one had told us where we were going.” 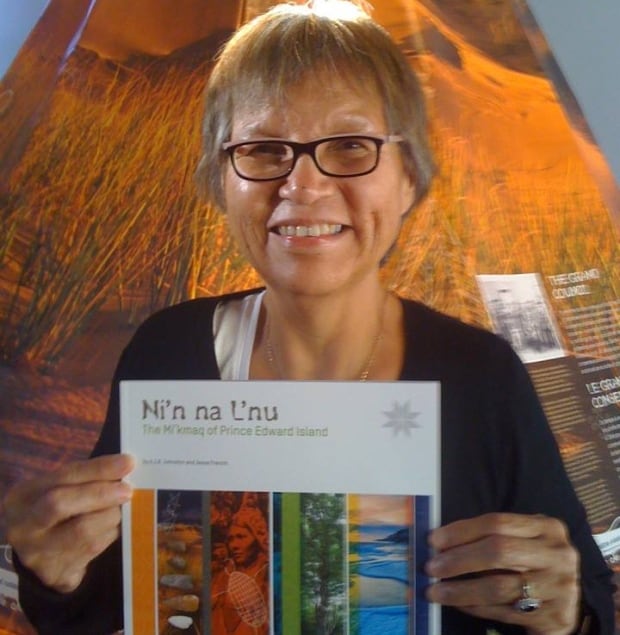 Reconnecting with her Mi’kmaq culture and language is part of the rebuilding Charlotte Morris had to do to heal as a residential school survivor. (Submitted)

Morris remembers how big the place felt that first day, counting the flights of stairs she had to climb to get to the dormitory, and how scary the nuns seemed.

“You know, afraid of them because we were with strangers. Like, we didn’t say a word. We just cried.”

After that first day, Morris and her sister weren’t allowed any contact with their little brother. The only time girls and boys saw each other was during mealtimes in the large dining hall, but even then Morris said the boys were on one side and the girls on the other.

Every night trying to fall asleep, Morris held out hope she would get to go home, but it would be a year before that happened, when Morris and her siblings went home for the summer.

Morris only spent three years at the school, but said it took two decades for her to start to recover emotionally from the treatment she and other students faced while they were there, like being forced to stay outside in bad weather.

“It could be freezing cold out there, it could be raining and they won’t let you in, even if you knock on the door to come in. They’d keep the door locked.”

But there was one small silver lining — outside, the girls could speak to each other in Mi’kmaq, something they would be severely punished for when the nuns were around. 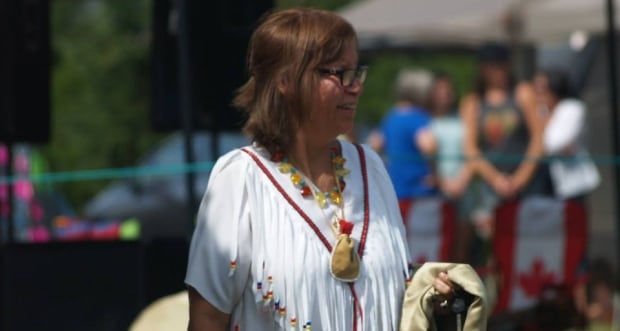 Charlotte Morris hopes learning about the effects of residential school will help Grade 9 Island students have more understanding of some of the struggles First Nations people continue to face. (Submitted)

When the school closed three years later, Morris headed home to Lennox Island, but the damage from those years had already been done.

‘We’ve been told it goes through seven generations before the effects disappear. As this happened during most of our lifetimes, we still have a long way to go.’— Tammy MacDonald, historical researcher with the Mi’kmaq Confederacy of Prince Edward Island

“I was lost. My identity was gone. You know, I just didn’t feel like a person. I wasn’t able to function on my own.”

Home wasn’t the same either. Her parents had split up and alcohol had taken over their lives, said Morris.

“So we didn’t have a happy home to go to. We were free, but we weren’t free in a happy way.”

Ten years after a bad first marriage that included drinking and drugs, Morris finally sought counseling at the age of 29. She said unraveling that emotional damage took time.

‘I had no parenting skills’

Morris admits her emotional struggles have had an impact on her four children as well.

“I didn’t have an idea how to bring up kids,” said Morris.

“I had no parenting skills because I didn’t learn anything when I was a teenager, cause, like I said, my parents were into their addictions, in their drinking, and not able to be there for us at a young age. So I didn’t have a clue what I was supposed to do.” 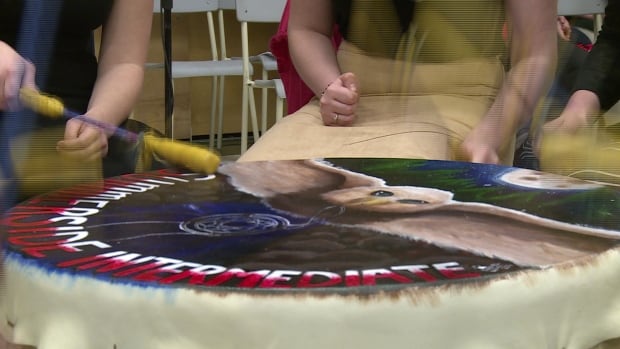 This native drum was made by Summerside Intermediate students during their Reconciliation as Education course. (Laura Chapin/CBC)

Tammy MacDonald, a historical researcher with the Mi’kmaq Confederacy of Prince Edward Island who was a consultant for the Grade 9 course, said the emotional effects of residential school take generations to heal.

“We’ve been told it goes through seven generations before the effects disappear. As this happened during most of our lifetimes, we still have a long way to go,” said MacDonald.

‘We’re not dealing with our problems. We keep it inside us. We’re too scared to talk about it because that abuse is still there … So it’s good that they know this.’— Charlotte Morris

She hopes the knowledge shared in the course will help students understand what First Nations peoples are still going through today. That’s Morris’s hope as well.

“That way they will understand why some of us behave in a certain way. Like we can’t reach out, like we’re not trained to reach out. We’re not dealing with our problems. We keep it inside us. We’re too scared to talk about it because that abuse is still there,” said Morris.

“So it’s good that they know this.”

Morris said she still hasn’t completely recovered from what she went through, but she’s still striving to get there.