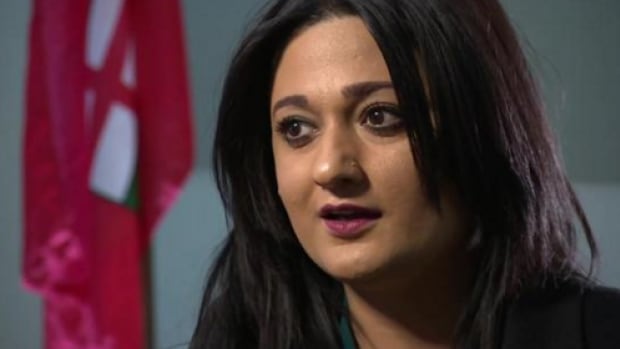 At 39, Rana Bokhari is the youngest person ever to lead the Manitoba Liberal Party. (CBC)

Liberal Leader Rana Bokhari admits it was “harsh” to unleash her lawyers on an indigenous activist who wanted information about her past.

But the woman who wants to be Manitoba’s next premier says the defamatory tone of his request warranted action.

“(It was) harsh, yeah,” Bokhari told the CBC. “But … you almost feel like you’re getting slandered, right?”

Bokhari was responding to an email request sent to her by Gerald McIvor, a residential school survivor. McIvor wanted information about her time as a junior lawyer with the Carroll Law Office.

Between 2012 and 2013, Bokhari worked there. Among other things, her job was to deal with residential school survivors who were applying for compensation. That law firm, along with an agency run by Bokhari’s brother, was later named in an investigation regarding fees charged to the claimants.

“It was harsh, yeah…..but you almost feel like you’re getting slandered.”-Liberal leader Rana Bokhari

That’s why McIvor sent her an email with five “pointed questions” about her work with the claimants.

Her response? An email from the Liberal Party’s lawyers that warned of legal action.

“I think they broke the landspeed record by having the Liberal Party lawyer send me an email threatening me with a slander and defamation lawsuit,” McIvor said. “And he strongly suggested that I govern myself accordingly.”

In a one-on-one interview with the CBC, Bokhari said she knew absolutely nothing about the fees charged. But McIvor’s email, complete with a deadline demanding answers, implied otherwise.

“Come to me and have a conversation one on one, and I’ll have any open conversation with you. But to threaten me in that way [with] timelines.… Yeah, of course (I felt threatened),” Bokhari said.

Back in 2010, Syed Bokhari, Rana’s brother, along with Ken Carroll, of the Carroll Law Office, and others formed a business called First Nations Residential School Solutions, Inc. It was created to help residential school survivors access compensation from the government. They were called ‘form fillers.’ Basically they hired themselves out to help the claimants navigate their way through the legal process, forms and all.

Some of these claimants were represented by the Carroll Law Office, where Ken Carroll and others there would process their claims.

The federal government paid lawyers 15 per cent of the settlements for processing each claim. In the more complicated cases, lawyers are sometimes allowed to directly charge the claimants additional fees, up to another 15 per cent, for a maximum total of 30 per cent.

Ken Carroll did not charge those extra fees.

But while his law firm wasn’t charging the additional fees, the form-filling agency was, sometimes in the thousands of dollars. In one case, for example, after a claimant received the compensation cheque, Syed Bokhari escorted that claimant directly to a bank, so they could withdraw the cash to pay his fees.

In an April, 2014 decision, Justice Perry Schulman of the Manitoba Court of Queen’s Bench determined this was wrong, for a few reasons.

First, the fact that Bokhari was paid directly from the survivor’s compensation money; under the Indian Residential Schools Settlement Agreement, that’s forbidden.

Third, the courts determined that the combined fees between the form filling agency and the law firm exceeded the “30 per cent cap on legal fees.”

As a result, Justice Schulman deemed the financial agreement laid out by First Nations Residential School Solutions Inc. was “unconscionable” and the fees charged were “illegal.”

At the time, Ken Carroll told the court that he himself reimbursed the claimants, out of his own pocket. He says he then severed ties with First Nations Residential School Survivors, Inc.

Rana Bokhari was never named in the court documents. Nor was she investigated by the Law Society of Manitoba.

Bokhari said she had nothing to do with the fee arrangements and had no idea it was going on around her, because as a junior lawyer, she wasn’t privy to their actions.

“After the fact, 100 per cent, I was very emotional, I was very upset about it.”– Liberal Leader Rana Bokhari, upon learning about allegations of overcharging residential school claimants.

She said once she learned of the allegations, she was  “enraged” and “removed” herself from the law firm soon afterwards.

Looking back, she said, she wishes she’d seen the signs.

“In hindsight, yeah I can go back in time if I had some magical time machine and pay attention to, you know, something. But I can’t.”

The CBC requested comment from Syed Bokhari, but did not receive a response at publication time.

Steve Vincent, a lawyer representing Ken Carroll, said on Wednesday that his client declined to comment as the matter is still before the courts.

In a news release issued in June 2014, Carroll said, “After we learned of the actions to collect fees from the clients, we severed our relationship with FNRSS and voluntarily paid to these clients the amount that FNRSS had collected from them.”